From Redstone to Ludlow

John Cleveland Osgood's Struggle against the United Mine Workers of America 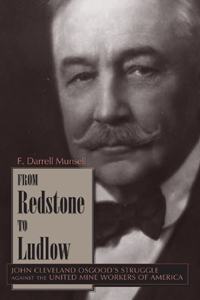 "Historians, teachers and informed citizens will value From Redstone to Ludlow for calling attention to an important chapter of US labor history that is fast receding into obscurity."
—Anthony B. Newkirk, Labour

"Munsell has provided us an interesting and engrossing book that spotlights the institutional and ideological context of the dispute's varied participants. Rather than merely retelling the events of Ludlow, it gives us a detailed glimpse into the character, motivations and actions of an instrumental man forgotten to history."
—Ethan Doetsch, EH.NET

"Munsell's meticulously researched and elegantly written book tells the story of Ludlow from the perspective of one of the most powerful coal operators in the region, John Cleveland Osgood. . . . Munsell's book is one of the best."
—Maria E. Montoya, New York University

"[A]n excellent way to gain greater insight into the inner workings of the ownership of the Colorado fuel industry."
—Center for Colorado and the West at Auraria Library

The most comprehensive study of John Cleveland Osgood to date, From Redstone to Ludlow covers events from 1892, when Osgood and his associates organized the Colorado Fuel and Iron Company, to 1917, when Osgood signed a contract with the United Mine Workers of America, marking the end of his long history of battling the union.

Called the Fuel King of the West, Osgood was the leading coal baron in the western mountain region and the most prominent spokesperson for the coal industry for over three decades. During this time, his anti-union policies made him the UMWA's most formidable foe in its effort to organize the Colorado coalfields.

From Redstone to Ludlow depicts the bipolarity of his approach to the threat of unionism. The "Redstone experiment," a model industrial village designed to improve the lives of workers through social programs, showed Osgood's efforts to attain his anti-union goals through compassion. Conversely, the Ludlow tent colony and the events that transpired there, marked by armed gunmen and machine guns paid for by Osgood, illustrate his willingness to resort to violence and intimidation for the same purpose.

A leading participant in the transformation of the West, Osgood helped to shape the character of the Gilded Age. Today, the beautiful village of Redstone and a granite memorial at Ludlow are reminders of Osgood's complex role in the clash between labor and management during the most violent industrial struggle in American history.