The Japanese American National Museum and the Culture of Collaborations 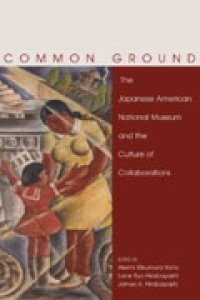 "As this collection clearly demonstrates, the Japanese American National Museum rejected the notion of the museum as a fortress of elite culture. . . the JANM hopes to act as an agent of social change, to both educate and act as a catalyst for community building. Common Ground offers an insider's look at how the [JANM] researches, funds, and creates its exhibits. Unlike other museum studies anthologies. . . this collection does not emphasize academic authors or theoretical framing of issues. . . . The resulting book is written in a highly accessible and, at times, almost journalistic style."
—Amerasia Journal

"Common Ground is important because it documents the multiple views of those people with firsthand experience in the museum world."
—Karen Mary Davalos, author of Exhibiting Mestizaje: Mexican (American) Museums in the Diaspora

"[P]rovides a refreshingly optimistic view of the metropolitan American city, promoting the enduring possibilities of multi-ethnic communities rather than dystopic scenes of urban strife."
—The Journal of American Ethnic History

Los Angeles's Japanese American National Museum, established in 1992, remains the only museum in the United States expressly dedicated to sharing the story of Americans of Japanese ancestry. The National Museum is a unique institution that operates in collaboration with other institutions, museums, researchers, audiences, and funders. In this collection of seventeen essays, anthropologists, art historians, museum curators, writers, designers, and historians provide case studies exploring collaboration with community-oriented partners in order to document, interpret, and present their histories and experiences and provide a new understanding of what museums can and should be in the United States.

Current scholarship in museum studies is generally limited to interpretations by scholars and curators. Common Ground brings descriptive data to the intellectual canon and illustrates how museum institutions must be transformed and recreated to suit the needs of the twenty-first century.

James A. Hirabayashi (1926-2012), had a distinguished thirty-year career at San Francisco State University which included positions of Dean of Ethnic Studies and Dean of Undergraduate Studies. In the 1990s Jim also served as the chief project advisor for the International Nikkei Research Project at the Japanese American National Museum.