The Boys of Winter

Life and Death in the U.S. Ski Troops During the Second World War 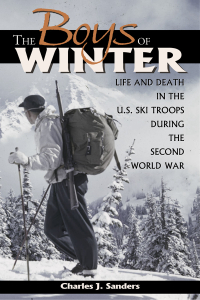 "Sanders . . . puts a personal face on the 10th Mountain Division and connects the reader more intimately to their story. It was, and is, a compelling story, and Sanders tells it well."
—Tom Miller, www.Military.com

"A great companion for any [ski] trip."
—Powder, Editor's Choice

"An immensely valuable and substantial addition to 10th Mountain literature and to the history of skiing in the United States."
—International Ski History Association

"Focusing on the lives, and the deaths, of three young men from vastly different backgrounds, Sanders traces the history of the U.S. Army's Tenth Mountain Division from its inception, training in Washington and Colorado, first blooding in the Aleutians, and finally, to deployment to Italy in 1945. . . . Sanders's treatment of strategic questions is capable and his discussion of the division's high command, especially Fifth Army Commander General Mark Clark, is far from uncritical. His accounts of combat, usually in the survivors' voices, are riveting. . . . In his brief, eloquent conclusion, Sanders notes the outstanding contributions of those who survived the war and wonders what might have been. . . . Amply illustrated with photos and maps, The Boys of Winter is a sensitive tribute."
—Western Historical Quarterly

"The Boys of Winter perfectly captures the spirit of the men who made the division what it was, as well as the spirit of those troopers who survived to help shape the postwar world."
—John Imbrie, 10th Mountain Division historian and co-editor of Good Times and Bad Times

"The best available look into the minds of the soldiers of the Tenth Mountain Division."
—History: Reviews of New Books

"Sanders's book isn't just another collection of ski tales, but rather serves as a full-fledged study on the U.S. ski troops during World War II. The Boys of Winter endows readers with valuable insight not only in regard to the history of the ski industry, but also the history of America."
—National Ski Areas Association Journal

"Told through the experiences of three of its most notable and flamboyant personalities . . . The Boys of Winter preserves the record of a unique US Army division that has been largely overlooked by virtue of its service on the often forgotten Italian front."
—America in WWII Magazine

"Sanders distills the complicated and years-long saga of the creation of America's ski troops into an intensely personal story . . .[and] doesn't shy away from a question that haunts the survivors of the division, and the families of those who never returned . . . Was the Italian campaign intensified in the closing months of the war to justify the time and expense devoted to the development of the ski troops? Was the costly campaign primarily intended to keep the name of Gen. Mark Clark in the headlines? No part of this remarkable history is more important, or more relevant, in light of today's American military involvement overseas."
—Durango Herald

"The young men of the Tenth Mountain Division, bound together by a love of mountains and skiing, endured some of the bloodiest fighting of World War II in the Italian campaign and prevailed against seasoned German troops in virtually impregnable defenses. The Boys of Winter is a moving tale of their heroism and sacrifice."

The Boys of Winter tells the true story of three young American ski champions and their brutal, heroic, and fateful transformation from athletes to infantrymen with the 10th Mountain Division. Charles J. Sanders's fast-paced narrative draws on dozens of interviews and extensive research to trace these boys' lives from childhood to championships and from training at Mount Rainier and in the Colorado Rockies to battles against the Nazis.