The Archaeology of Large-Scale Manipulation of Prey

The Economic and Social Dynamics of Mass Hunting 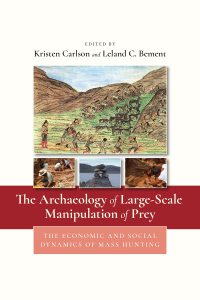 "The value in this edited volume is the discussion not just of the archaeology of mass kills, but an exploration of the social, economic, logistic, and ritual aspects of large-scale hunting, and the archaeological visibility (or lack thereof) of some of these elements."
—Midcontinental Journal of Archaeology

"The Archaeology of Large-Scale Manipulation of Prey is a good read. It adds much toward a better understanding of various logistic aspects and multiple social implications relative to large-scale, group hunting as reflected in the archaeological and ethnographic record."
—Journal of The Iowa Archeological Society

The Archaeology of Large-Scale Manipulation of Prey explores the social and functional aspects of large-scale hunting adaptations in the archaeological record. Mass-kill hunting strategies are ubiquitous in human prehistory and exhibit culturally specific economic, social, environmental, and demographic markers. Here, seven case studies—primarily from the Americas and spanning from the Folsom period on the Great Plains to the ethnographic present in Australia—expand the understanding of large-scale hunting methods beyond the customary role of subsistence and survival to include the social and political realms within which large-scale hunting adaptations evolved.

Addressing a diverse assortment of archaeological issues relating to the archaeological signatures and interpretation of mass-kill sites, The Archaeology of Large-Scale Manipulation of Prey reevaluates and rephrases the deep-time development of hunting and the themes of subsistence to provide a foundation for the future study of hunting adaptations around the globe. Authors illustrate various perspectives and avenues of investigation, making this an important contribution to the field of zooarchaeology and the study of hunter-gatherer societies throughout history. The book will appeal to archaeologists, ethnologists, and ecologists alike.

Kristen A. Carlson is assistant professor in the Anthropology Department at Augustana University. Her research focuses on paleoenvironmental reconstruction through the use of stable isotopes and trace elements, predominantly with Paleoindian bison kills in North America. She has studied bison herd manipulation and drive-lane construction for bison jumps using GIS analysis and worked for the National Park Service, where she studied and preserved prehistoric Southwestern pueblo sites.

Leland C. Bement is an archeologist with the Oklahoma Archeological Survey at the University of Oklahoma, Norman. He has over thirty-five years of experience in the prehistoric archaeology of the southern plains of North America and has worked extensively on Paleoindian and Archaic sites in Texas and Oklahoma. He is the author of Hunter-Gatherer Mortuary Practices during the Central Texas Archaic and Bison Hunting at Cooper Site.