A Documentary History of the Mormon War in Illinois 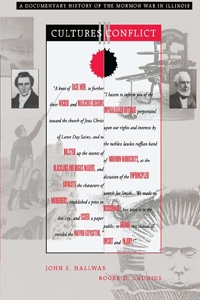 "Cultures in Conflict offers students of history an invaluable source of documents regarding the history of the Mormon presence in Illinois. Few local histories are so academically sound."
—Illinois Times

"In this handsomely designed collection, editors John Hallwas and Roger Launius offer ninety documents to represent the disparate viewpoints of participants in what the non-Mormon citizens of Illinois came to know as the Mormon War. . . . [W]hile Cultures in Conflict reveals the differences among people in the past, it also reminds us that Nauvoo's history continues to call forth differing visions of historical understanding."

Hallwas and Launius have compiled and written the most balanced and thorough account yet of the events and circumstances that led to the forced Mormon exodus from Nauvoo following the mini civil war that erupted in Illinois during the 1840s.

John E. Hallwas is Distinguished Professor Emeritus at Western Illinois University. Well-known for his many books about Illinois and the Midwest, he has also written scores of journal articles and hundreds of newspaper and magazine essays, as well as several plays.

Roger D. Launius is Associate Director of Collections and Curatorial Affairs at the Smithsonian Institution’s National Air and Space Museum in Washington, D.C. Between 1990 and 2002 he served as chief historian of the National Aeronautics and Space Administration.