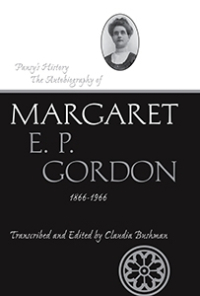 "A delight to read. A naturally gifted writer, Pansy offered an unusually detailed portrayal of material life at the turn of the twentieth century and a vivid picture of the many places where she lived. Her memoir enlarges the meaning of family and kinship among early Mormons, expands the geography of Mormon history, and adds a new dimension to the workings of gender in the early twentieth century."
—Laurel Thatcher Ulrich, author of Well-Behaved Women Seldom Make History

Margaret "Pansy" Gordon's life covered a remarkable span of years and territory. She lived one century, and the years took her from England to residences in British Columbia, Salt Lake City, and an Ojibway village on Georgian Bay; back to Utah and then Canada to homes at the shore of Bear Lake, on an Alberta farm, and in a prairie town; and to Los Angeles for the last decades of her life. She had gone to British Columbia as the daughter of an Anglican missionary to the Tsimshian Indians. She lived in Los Angeles as a Mormon missionary assigned to work as a genealogist. Her personal journey through frontier adventures, religious service, and economic challenges is as worth noting as where she went, but it would be far less engaging if she did not write about it so well. Her memory for detail and her felicity in putting it to paper will reward those who delve into her "Family History," as she titled her memoir.

Claudia L. Bushman, descendant of Pansy Gordon and author of numerous books, taught American studies at Columbia University for many years and taught Mormon studies at Claremont Graduate University from 2008 to 2011. She has included letters and other documents that complement this memoir.

Claudia L. Bushman is an American historian with a focus in women's history, particularly as pertains to the history of The Church of Jesus Christ of Latter-day Saints. She helped found Exponent II and established a Mormon women oral history project at Claremont Graduate University. She is a professor emerita of American Studies at Columbia University.