Oni, from Ancient Times to the Present 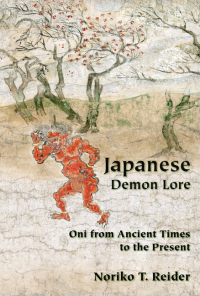 "As Noriko Reider eloquently shows in this volume, oni let us have a glimpse at how the Japanese imagine their world in its relation with the outside, continually reinterpreted according to the change of times. They help people to come to terms with the other."
—Peter Knecht, editor of Asian Folklore Studies

"Well researched and written, this book would work well in the classroom for looking at Japanese folk religion and contemporary pop culture."
—Religious Studies Review

“This book presents as a scholarly treatise on the transumtable and tenacious aspects of the oni as a cultural coping strategy adapting to time and circumstances. . . . [Reider] reveals convincingly that the oni continues to have a use value in portraying societal norms in literature, the media and the performing arts.”
—B.C. Folklore

Oni, ubiquitous supernatural figures in Japanese literature, lore, art, and religion, usually appear as demons or ogres. Characteristically threatening, monstrous creatures with ugly features and fearful habits, including cannibalism, they also can be harbingers of prosperity, beautiful and sexual, and especially in modern contexts, even cute and lovable. There has been much ambiguity in their character and identity over their long history. Usually male, their female manifestations convey distinctivly gendered social and cultural meanings.

Oni appear frequently in various arts and media, from Noh theater and picture scrolls to modern fiction and political propaganda, They remain common figures in popular Japanese anime, manga, and film and are becoming embedded in American and international popular culture through such media. Noriko Reider's book is the first in English devoted to oni. Reider fully examines their cultural history, multifaceted roles, and complex significance as "others" to the Japanese.

Noriko Tsunoda Reider is professor of Japanese at Miami University, where her research focuses on the supernatural in Japanese literature, folklore, and art. She is the author of Seven Demon Stories from Medieval Japan, Japanese Demon Lore, Mountain Witches and Tales of the Supernatural in Early Modern Japan. Her articles and reviews have appeared in Asian Ethnology, Japan Forum, and Film Criticism, among other journals.