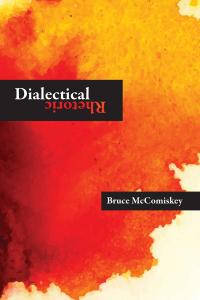 “What the author proposes here is not found anywhere else, and his development of a third dialectic—that is, an entirely new model for understanding dialectic—well, this is not mere appropriation; this is theory making.”
—Frank Farmer, University of Kansas, author of After the Public Turn and Saying and Silence

"For those interested in the history of rhetoric and its connection to contemporary composition theory and pedagogy, this book is essential reading."

In Dialectical Rhetoric, Bruce McComiskey argues that the historical conflict between rhetoric and dialectic can be overcome in ways useful to both composition theory and the composition classroom.

The discipline of writing studies is on the brink of developing a new relationship between dialectic and rhetoric, one in which dialectics and rhetorics mediate and negotiate different arguments and orientations that are engaged in any rhetorical situation. This new relationship consists of a three-dimensional hybrid art called “dialectical rhetoric,” whose method is based on five topoi: deconstruction, dialogue, identification, critique, and juxtaposition. Three-dimensional dialectical rhetorics function effectively in a wide variety of discursive contexts, including digital environments, since they can invoke contrasts in stagnant contexts and promote associations in chaotic contexts. Dialectical Rhetoric focuses more attention on three-dimensional rhetorics from the rhetoric and composition community.