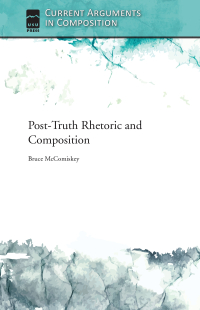 Post-Truth Rhetoric and Composition is a timely exploration of the increasingly widespread and disturbing effect of “post-truth” on public discourse in the United States. Bruce McComiskey analyzes the instances of bullshit, fake news, feigned ethos, hyperbole, and other forms of post-truth rhetoric employed in recent political discourse.

The book frames “post-truth” within rhetorical theory, referring to the classic triad of logos, ethos, and pathos. McComiskey shows that it is the loss of grounding in logos that exposes us to the dangers of post-truth. As logos is the realm of fact, logic, truth, and valid reasoning, Western society faces increased risks—including violence, unchecked libel, and tainted elections—when the value of reason is diminished and audiences allow themselves to be swayed by pathos and ethos. Evaluations of truth are deferred or avoided, and mendacity convincingly masquerades as a valid form of argument.

In a post-truth world, where neither truth nor falsehood has reliable meaning, language becomes purely strategic, without reference to anything other than itself. This scenario has serious consequences not only for our public discourse but also for the study of composition.