A Theory, a History, a Reflection 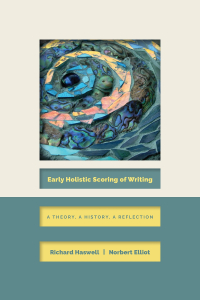 “This book will establish writing assessment as terrain occupied by writing studies scholars. . . . The authors are pioneering a way of viewing history that is important to writing assessment and its methodologies.”
—Diane Kelly-Riley, University of Idaho

What is the most fair and efficient way to assess the writing performance of students? Although the question gained importance during the US educational accountability movement of the 1980s and 1990s, the issue had preoccupied international language experts and evaluators long before. One answer to the question, the assessment method known as holistic scoring, is central to understanding writing in academic settings.

Early Holistic Scoring of Writing addresses the history of holistic essay assessment in the United Kingdom and the United States from the mid-1930s to the mid-1980s—and newly conceptualizes holistic scoring by philosophically and reflectively reinterpreting the genre’s origin, development, and significance.

The book chronicles holistic scoring from its initial origin in the United Kingdom to the beginning of its heyday in the United States. Chapters cover little-known history, from the holistic scoring of school certificate examination essays written by Blitz evacuee children in Devon during WWII to teacher adaptations of holistic scoring in California schools during the 1970s. Chapters detail the complications, challenges, and successes of holistic scoring from British high-stakes admissions examinations to foundational pedagogical research by Bay Area Writing Project scholars. The book concludes with lessons learned, providing a guide for continued efforts to assess student writing through evidence models.

Exploring the possibility of actionable history, Early Holistic Scoring of Writing reconceptualizes writing assessment. Here is a new history that retells the origins of our present body of knowledge in writing studies.

Richard Haswell retired from Texas A&M University, Corpus Christi, in 2005. At Washington State University, he directed the composition program (1972–82) and the cross-campus writing-assessment program (1993–96). He is author of Gaining Ground in College Writing (1991), coauthor of Early Holistic Scoring of Writing (2019) with Norbert Elliot, Authoring (2010) and Hospitality and Authoring (2015) with Janis Haswell, and coeditor of Comp Tales (2000), Beyond Outcomes (2001), and Machine Scoring of Student Essays (2006). With colleague Glenn Blalock, he created CompPile, an online bibliography of scholarship in composition and rhetoric.

Norbert Elliot is research professor at the University of South Florida and professor emeritus of English at New Jersey Institute of Technology. He is coauthor of Early Holistic Scoring of Writing, with Richard Haswell, and Very Like a Whale: The Assessment of Writing Programs, with Edward M. White and Irvin Peckham, and coeditor of Writing Assessment, Social Justice, and the Advancement of Opportunity, with Mya Poe and Asao B. Inoue, and Talking Back: Senior Scholars and Their Colleagues Deliberate the Past, Present, and Future of Writing Studies, with Alice Horning.