Reading and Writing Instruction in the Twenty-First Century

Recovering and Transforming the Pedagogy of Robert Scholes 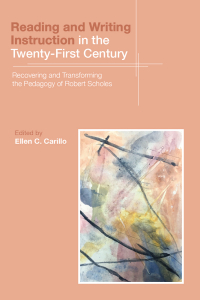 “This project aims to honor the work of a colleague who attempted to bridge serious gaps within English studies—between the study of literature and the study of writing, between the consumption and production of texts—and it does so admirably while deftly using Scholes’s work to magnify the issues of our day.”
—Howard Tinberg, Bristol Community College

Robert Scholes passed away on December 9, 2016, leaving behind an intellectual legacy focused broadly on textuality. Scholes’s work had a significant impact on a range of fields, including literary studies, composition and rhetoric, education, media studies, and the digital humanities, among others. In Reading and Writing Instruction in the Twenty-First Century contemporary scholars explore and extend the continued relevance of Scholes’s work for those in English and writing studies.

In this volume, Scholes’s scholarship is included alongside original essays, providing a resource for those considering everything from the place of the English major in the twenty-first century to best practices for helping students navigate misinformation and disinformation. Reading and Writing Instruction in the Twenty-First Century not only keeps Scholes’s legacy alive but carries it on through a commitment, in Scholes’s own words, to “offer our students . . . the cultural equipment they are going to need when they leave us.”

Ellen C. Carillo is professor of English at the University of Connecticut and the writing program coordinator at its Waterbury Campus. She is the author of Securing a Place for Reading in Composition, A Writer’s Guide to Mindful Reading, Teaching Readers in Post-Truth America, Reading and Writing Instruction in the Twenty-First Century, and the MLA Guide to Digital Literacy, as well as the coeditor of Teaching Critical Reading and Writing in the Era of Fake News and Reading Critically, Writing Well. Her scholarship has appeared in several journals and edited collections.