Mercury and the Making of California 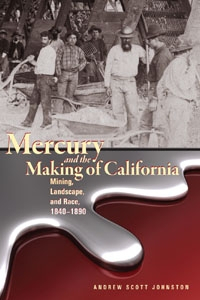 "An outstanding contribution to our understanding of the history of the mercury industry in California and how it changed the development of California and the American West."
—Donald L. Hardesty, Professor Emeritus of Anthropology, University of Nevada, Reno

"The definitive business analysis and social history of California mercury mining for many years to come."

"[A] wonderfully eclectic book. . . . Johnston's larger point is well made and indisputable and suggests, as many of the best new mining history studies have done, that we live today in a culture and society shaped by the way we mine our metals and the metals that we mine."

"Andrew Scott Johnston’s essential and fascinating study of the temporal, spatial, and economic impact of mercury mining on California and the world fills an open pit-scale omission in the history of a state where gold has always enjoyed star billing. . . . Johnston's close study of the industry does much to restore mercury to the crucial role it once played in the world and California's economy and to the shaping of its landscape."
—Gray Brechin, Journal of Historical Geography

"[A] richly detailed portrait of a little-studied industry that will certainly be of interest to historians of nineteenth-century California. It adds a valuable new angle to better-known histories of gold and silver mining in the state, as well as to the broader commercial development of the western United States."

Mercury and the Making of California, Andrew Johnston's multidisciplinary examination of the history and cultural landscapes of California's mercury-mining industry, raises mercury to its rightful place alongside gold and silver in the development of the American West.

Gold and silver could not be refined without mercury; therefore, its production and use were vital to securing power and wealth in the West. The first industrialized mining in California, mercury mining had its own particular organization, structure, and built environments. These were formed within the Spanish Empire, subsequently transformed by British imperial ambitions, and eventually manipulated by American bankers and investors. In California mercury mining also depended on a workforce differentiated by race and ethnicity. The landscapes of work and camp and the relations among the many groups involved in the industry—Mexicans, Chileans, Spanish, English, Irish, Cornish, American, and Chinese—form a crucial chapter in the complex history of race and ethnicity in the American West.

This pioneering study explicates the mutual structuring of the built environments of the mercury-mining industry and the emergence of California's ethnic communities. Combining rich documentary sources with a close examination of the existing physical landscape, Johnston explores both the detail of everyday work and life in the mines and the larger economic and social structures in which mercury mining was enmeshed, revealing the significance of mercury mining for Western history.