A History of Gold Dredging in Idaho 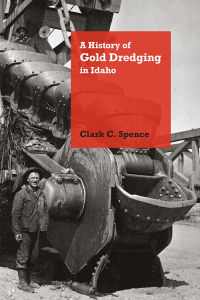 "Providing a record of Idaho’s dredging history for the first time, this book is a significant contribution to the knowledge and understanding of Western mining, its technology, and its overall development as a major industry of the twentieth century."
—Mining History News

"For readers interested in a highly detailed account of the technological and business history of gold dredging in Idaho organized geographically, this book will prove invaluable. Spence has done yeoman’s work on these subjects, and the notes alone will prove a helpful guide for further research."
—H-Net Reviews, H-Environment

"Clark Spence, correctly labeled 'the Dean of Mining Historians' . . . has completed an almost encyclopedic recounting of dredging attempts, both successful and failed, across Idaho. The book will appeal primarily to specialists in mining history, although the later chapters include useful materials for those interested in environmental history and federal impacts on resource development."
—Western Historical Quarterly

"This book, clearly the product of years of painstaking research, offers a treasure trove of information about the Gem State's fascinating, but now largely forgotten, history of gold dredge mining. It is sure to be a much-valued resource for mining, western, and Idaho historians, and history buffs, for many years to come."

“Spence’s history is comprehensive, interesting, and entertaining. His attention to detail, his flawless research, his use of language, and his ability to demonstrate the relevance of history make this an essential addition to a fundamental element in Idaho’s development. Clark Spence’s history of gold dredging in Idaho provides a critical, and happily colorful, addition to our mining past and our restorative present and future.”
—Pacific Historical Review

A History of Gold Dredging in Idaho tells the story of a revolution in placer mining—and its subsequent impact on the state of Idaho—from its inception in the early 1880s until its demise in the early 1960s. Idaho was the nation’s fourth-leading producer of dredged gold after 1910 and therefore provides an excellent lens through which to observe the practice and history of gold dredging.

Author Clark Spence focuses on the two most important types of dredges in the state—the bucket-line dredge and the dragline dredge—and describes their financing, operation, problems, and effect on the state and environment. These dredges made it possible to work ground previously deemed untouchable because bedrock where gold collected could now be reached. But they were also highly destructive to the environment. As these huge machines floated along, they dumped debris that harmed the streams and destroyed wildlife habitat, eventually prompting state regulations and federal restoration of some of the state’s crippled waterways.

Providing a record of Idaho’s dredging history for the first time, this book is a significant contribution to the knowledge and understanding of Western mining, its technology, and its overall development as a major industry of the twentieth century.

A map of major gold dredging sites in Idaho can be found below.