by Ethan A. Schmidt 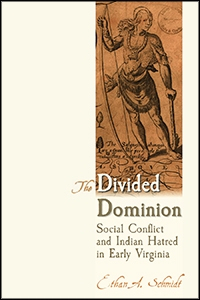 Buy Now
Copyright Clearance Center
Member Institution Access
"[A] valuable reappraisal of early Virginia history. . . . The Divided Dominion provokes important questions about who exactly counted as an 'Indian' and how that category shifted in the seventeenth and eighteenth centuries."

"Because Schmidt states his arguments forcefully and makes it clear why they should matter to us, and has done so in a narrative both engaging and brief, The Divided Dominion will be effective in the undergraduate classroom."

"Undergraduate readers will appreciate the synthetic nature of the text while scholars can use Schmidt’s work as a basis to continue to investigate attitudes toward Natives across the seventeenth century."

"Exceptionally well-written and cogently argued, The Divided Dominion offers an important and disturbing take on early Virginia for students and scholars alike."

In The Divided Dominion, Ethan A. Schmidt examines the social struggle that created Bacon's Rebellion, focusing on the role of class antagonism in fostering violence toward native people in seventeenth-century Virginia. This provocative volume places a dispute among Virginians over the permissibility of eradicating Native Americans for land at the forefront in understanding this pivotal event.

Myriad internal and external factors drove Virginians to interpret their disputes with one another increasingly along class lines. The decades-long tripartite struggle among elite whites, non-elite whites, and Native Americans resulted in the development of mutually beneficial economic and political relationships between elites and Native Americans. When these relationships culminated in the granting of rights—equal to those of non-elite white colonists—to Native Americans, the elites crossed a line and non-elite anger boiled over. A call for the annihilation of all Indians in Virginia united different non-elite white factions and molded them in widespread social rebellion.

The Divided Dominion places Indian policy at the heart of Bacon's Rebellion, revealing the complex mix of social, cultural, and racial forces that collided in Virginia in 1676. This new analysis will interest students and scholars of colonial and Native American history.

Ethan A. Schmidt was assistant professor of history at Delta State University.