I Hope I Join the Band 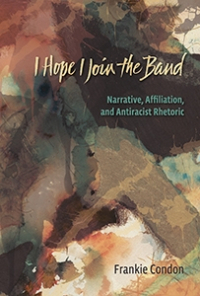 "Through unflinching personal narratives, Condon exemplifies the strategies of 'nuancing'—the continual process of interrogation, critique, reflection, and loving trust—that anti-racist white people can engage to resist unconscious, whitely narrative habits. As an enactment of Krista Ratcliffe's 'rhetorical listening,' the book invents and negotiates productive rhetorical positions for the critical, white anti-racist, filling the gap that is evacuated by critique alone, and demonstrates what Ratcliffe and Royster might have meant by a 'code of cross-cultural conduct' that avoids supplanting the voices of people of color. It is an important and novel contribution to our understanding of anti-racist discourse and activism."
—Hyoejin Yoon, West Chester University of Pennsylvania

"Sometimes a journey begins in song. In I Hope I Join the Band, Frankie Condon leads readers through thought and historical circumstance on the way to understanding how racism tears at the possibility for healthy living. It is a book about preparing one's self to do the work of a lifetime. Preparing one's self—not clumsy attempts at rectification—this book dramatizes, is work of articulating strategy and practice, work that depends on particularity, honesty and imagination. . . . There is no shifting of responsibility here. I Hope I Join the Band is a work of disclosure—but not as self-aggrandizing gesture or self-satisfied statement. It is about choice and result, secret and revelation, confusion and discernment, history and presence. Condon investigates the problematic of the desire for change from within the many forms of ignorance and health we inhabit. . . . Throughout it, Condon demonstrates the task of decentering that we all need to perform in order to access our own inner workings—to understand, ironically, our centers, ourselves. The challenge is to get ready and be ready for stories and, even more, to accept responsibility for where they will take us."
—Claude Hurlbert, Indiana University of Pennsylvania

Both from the Right and from the Left, says Frankie Condon, we are stymied in talking well with one another about race and racism, by intransigent beliefs in our own goodness as well as by our conviction that such talk is useless. Therefore, she argues, white antiracist epistemology needs to begin not with our beliefs, but with our individual and collective awakening to that which we do not know.

Drawing on scholarship across disciplines ranging from writing and rhetoric studies to critical race theory to philosophy, I Hope I Join the Band examines the limits and the possibilities for performative engagement in antiracist activism. Focusing particularly on the challenges posed by raced-white identity to performativity, and moving between narrative and theoretical engagement, the book names and argues for critical shifts in understandings and rhetorical practices that attend antiracist activism.

Condon invents and negotiates productive rhetorical positions for the critical, white anti-racist, filling the gap that is evacuated by critique alone. This is an important and novel contribution to our understanding of anti-racist discourse and activism.