Rhetoric, Ethics, and the Teaching of Writing 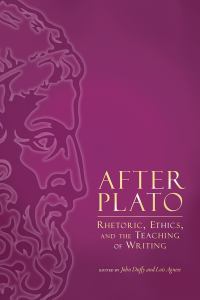 "The pieces in this collection show how, as political and ideological polarization, economic inequality, mass incarceration, and environmental destruction increase in the twenty-first century, ethics should increasingly be part of the conversation in the field. This book will be a touchstone on syllabi and in conference conversations over the coming years and ignite ongoing (and long overdue) conversations about ethics, rhetoric, and writing studies.”
—Bonnie Smith Whitehouse, Belmont University

"After Plato deepened . . . my understandings of classical rhetoric and ethics, its ancient counterparts, and contemporary locations and frameworks for ethics as well. They gave me more reasons, energy, and hope for continuing to fight the good fight."
—Composition Studies

After Plato redefines the relationships of rhetoric for scholars, teachers, and students of rhetoric and writing in the twenty-first century. Featuring essays by some of the most accomplished scholars in the field, the book explores the diversity of ethical perspectives animating contemporary writing studies—including feminist, postmodern, transnational, non-Western, and virtue ethics—and examines the place of ethics in writing classrooms, writing centers, writing across the curriculum programs, prison education classes, and other settings.

When truth is subverted, reason is mocked, racism is promoted, and nationalism takes center stage, teachers and scholars of writing are challenged to articulate the place of rhetorical ethics in the writing classroom and throughout the field more broadly. After Plato demonstrates the integral place of ethics in writing studies and provides a roadmap for future conversations about ethical rhetoric that will play an essential role in the vitality of the field.

John Duffy is professor of English at the University of Notre Dame.  He has published on the ethics of writing, the rhetoric of disability, and the historical development of literacy and rhetoric in cross-cultural contexts. His books include the edited collections After Plato and Literacy, Economy, and Power, and he is the author of Provocations of Virtue and Writing from These Roots, awarded the 2009 Outstanding Book Award by the Conference on College Composition and Communication. Duffy is a recipient of a National Endowment for the Humanities Fellowship and the Rev. Edmund P. Joyce, C.S.C., Award for Excellence in Undergraduate Teaching.

Lois Agnew is professor of writing and rhetoric at Syracuse University. She is the author of two books, Outward, Visible Propriety and Thomas De Quincey: British Rhetoric’s Romantic Turn, and has published articles in College English, Rhetoric Society Quarterly, CCC, Rhetorica, Rhetoric Review, and other journals and edited collections. Agnew is the recipient of the 2015 William Wasserstrom Prize for Graduate Teaching.